I've read more than once that it's 'amateur' to use only three or four colors, (primary colors at that) mainly because it's…
Continue

From the logs of R. Brawne, Captain of the Othello:

We had heard the rumours of the fantastic wealth being found across the Vast in those wild lands we call Eternus. Unlike our homelands of Airethe, that expanse of wilderness is virtually unsettled by man or beast but is host to strange folk and their most unusual ways.…

You can now read excerpts from the first chapters of Captain Killian and the Coin-Operated Boy by choosing a chapter from a menu tab at https://captainkillian.wordpress.com . Check out this novel-in-progress and follow Capt. Killian on her missions as a private (and most discreet) personal courier, delivering classified documents, singular packages, and confidential communications, across the various multi-verses.…

My new YA dark fantasy novel is nearing completion and will be released sometime at the beginning of the new year (2015). The talented and wonderful SweediesArt created this fabulous book cover for WHN: The Brief History of Datura and Daemion Phryxus

Datura Feldspar is the daughter of Kaitlynn Feldspar, the undersecretary to Colonel Jacob Vinter - and his lover. Datura was the illegitimate child of this union and soon after her birth, Kaitlynn was transferred into the Department of Military Transport where she would have a lenient job and not be questioned about her family.

While Colonel Vinter never personally saw to the raising of his only daughter, he did provide for her education monetarily. She attended Miss Maddelin Leech's…

SteamPunk 'n' zombies! Two great tastes that taste great together. The next chapter of GOLDEN SUN is now available for your enjoyment at thewriteguyblog.wordpress.com My ongoing novel chronicles the adventures of intrepid Victorian archeologist, Constance McArthur.

The new issue of CONCORDIUM is out. Phineas J. Foxx has done a magnificent job putting it together. It's got a little of everything that will tantalize and titillate Steampunkers everywhere. Plus CONCORDIUM has honored me by publishing my fiction short story, SEADRAGON. Aside from that, the entire publication is a great read and you can download it for free at http://www.concordiummagazine.com/CONCORDIUM02.pdf You can't miss, a… Continue

From Wales to Jakarta, a Globe Trotting Adventure to Halt an Invasion in 1883, an unscrupulous duo, the Dummond brothers, steal secrets from the first expedition to fuel their bold ambitions; to lead humanity into space and immortalize themselves in chronicles of history.

It's probably the most difficult but most fun process of the entire Mrs. E production for me. Whilst I am no George Lucas, composoting the actors to virtual worlds is fun process, especially if they have a presence about them as Rachel Bush does. For those of you wondering what I have been using, it…

Mrs.E: First Minisode and other news

I know it;s been awhile folks, but here is a little update. The first Minisode counting down to "First Night" finally up. It's been a busy month for us here at the Mrs. E team, with 2 films due for December release. The I am also pleased to announce that my new daughter, SpirtRayne was born on the 25th October, hence the delay. So a new life breathes new life into Mrs. E. First…

Starting in November of 2007 and continuing until July of 2010, I was involved in a Deadlands role playing game. It was this game that prompted me to extend my steampunk experience beyond merely reading the literature and begin dressing the part.

Additionally, I decided that I would chronicle the game as a writing exercise. I didn’t want to write in the third person so that I could practice writing in the…

Good day to all you lovely steampunk people! I'd like to introduce myself to you all.

Born in Nebraska and still living there despite numerous forays elsewhere, I have a house, an adorable Basset Hound named Erasmus, a black belt in Shinkendo (Japanese sword-fighting), and seven years' experience teaching college-level composition. I've worked as a TV talent on an English-teaching program, laid concrete, hiked on the Appalachian Trail, and recorded a music album with my…

Mrs.E: Casting update and other news 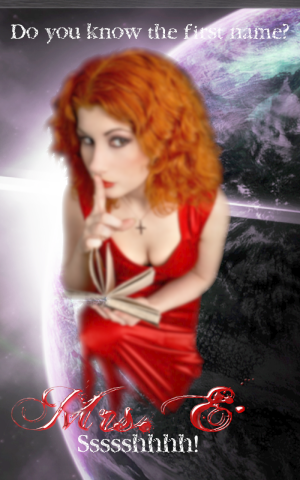 Well it's been a heck of a busy weekend and today shows no means of slowing down. We've started our meme campaign for the series with the many faces of Mrs. E campaign. Each poster shows an interpretation of the enigmatic lady, who has become somewhat of a universal image for those women already committed to the… So a few of you Canadian steampunkers have been asking what we have in mind for the Canadian Chapter of Mrs. E. Well a fair few ideas if the saga…

If you're in the Springfield MO area and don't mind a rush major role in the Mrs. E series check out this link here It's never easy finding the perfect location for what you hope to be iconic. Our Costume director, Casey July may well have found it, if these images are anything to go by, the Tea Room at the center of reality will certainly be colorful and memorable, and come on guys if we get this place, you have to…