Arguably any steampunk outfit is only truly complete with the proper accessories. Clothing defines the time period you are in but your accessories define who and what you are emulating. Whether you are a soldier, a medic, a engineer, a blacksmith, a court jester, or a noblemen.

The cut and style of your clothing, the way you carry yourself these help to enhance the character you are representing, however what keeps people interested in your outfit? What separates a passing glance…

Custer's Last Jump by Utley and Waldrop, reviewed by The Well-read Steampunk

Welcome to The Well-read Steampunk, my blog about Steampunk literature. I will comment on Steampunk, Dieselpunk, Wild West/Weird West, and other sub-genres that share the Steampunk aesthetic.

I have been reading Steampunk since before the term was coined, enjoying works by Michael Moorcock, Kieth Laumer and Harry Harrison in the 70′s and…

Risen gets a great review at My Ethereality! http://sp.theyoungriderstv.net/wordpress/?p=1697 Thank you, to Raydeen! :)

EoD is now tweeting away on Twitter. You can get your EoD fix in 140 characters or less. Check us out! It is something really special when we run into someone who has a project out there, who is putting everything into it, and who is seeing what else they can do to this fascinating genre. Steampunk Holmes is an interactive, literary experience. There are big ideas brewing behind this new twist on an iconic detective. The art work is sick in detail, edge, and boundless imagination.

Immortality and the Age of Steam: An Introduction

February the Eighth, 1866
The Abode of the Sultana of the Undead
Nyerere Road, Stone Town
Zangebar (Zanzibar), Tanzania

The age of magnificence is now manifested in gears and steam..... Read More

With all the amazing inventions that had been accomplished, dreamed up, and were actually being used or developing.....what went so wrong that has left us in the world we now see. No more gentile ways of life. No adventure.

An artificial hand , with fingers moved by cogwheels and levers, was designed in 1551 by Frenchman Ambroise Paré. It worked so well that a handless cavalryman was able to grasp the reins of his horse.

So, here is a question…

Vastra & Jenny vs Cybermen in Japan

History through a steampunk lens | The Salt Lake Tribune My Dear Friends, Please take just a moment of your time to support your fellow steampunks by voting for the Dustin Kahlil Band. We are in the final hours of the competition and making our big push. I…

Please take just a moment of your time to support your fellow steampunks by voting for the Dustin Kahlil Band. We are in the final hours of the competition and making our big push. If you have already voted, please share and spread the word!

Thank you all so much! I am so proud to be a part of such a supportive community!

I jumped the gun last week; the Steampunk Symposium comes to life THIS weekend in Cincinnati! (You’d think I would know, living here and all, but it’s been hectic lately.)

From the makers of Skyrim comes Dishonored, a rather steampunky looking game. Color me…

My plague doctor mask is wearable now. However I think I'll be adding a second strap to help support it and I need to either smooth or pad the nose piece. It's will wear the skin off my nose if I wear it for too long. I've tried it on with the goggles and hat. I'm quite pleased with the look of it. Cool and a little bit creepy. I've started work on another leather top-hat. If this one works out, I think I'll call it frankenhat.

Sometimes, not everything that is written can fall into the story line, but it's necessary to know regardless. Which is, I suppose, how the blog began.

Without further ado, some back stories of those in question. (To be added to later as time permits) 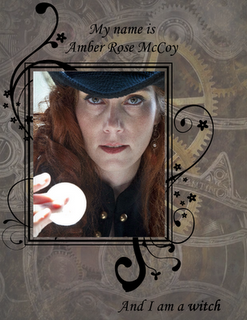 I assure you that my claims are quite true. It is an undisputed fact that anyone can wield magic. Children receive their birthday wishes and men utter their curses with little thought to the power behind their words; but this is magic in its most simplistic of forms. Mothers often caution their youngsters,…

As unphotogenic as I am, still I am out there representing. Today for the Port Townsend Leader. We, The Brass Screw Confederacy, are gearing up for our 3 day festival in beautiful Port Townsend. Looking at a photoshoot at the Old Consulate Inn. Wish me luck! I don't know if I am even doing Steampunk "right enough" to represent the genre. I hope lots of folks show up!

Beginning in 1829, Johann Wolfgang Döbereiner started plotting out trends in the properties of elements. He noted that some elements had similar properties with other elements in groups of three. English chemist John Alexander Reina Newlands saw a repetitive pattern and in 1869 published his law of octaves which states that "any given element will exhibit analogues behaviour to the eighth element following it in the table." Dmitri Mendeleev published his periodic table in the same year and…