“St James Infirmary Blues” by God’s Favorite Beefcake is the Sepiachord Video of the Day: http://www.sepiachord.com/index/?p=2661

The Steampunk Informant is out The Steampunk Informant is out
http://www.sepiachord.com/index/?p=2659 Sepiachord Playlist for the Week Ending May 27th~

Yes, I have had to explain steampunk to my parents. In fact, I am often called upon to explain steampunk to a lot of people. At the World Steam Expo I spoke with some half a dozen people over the course of the weekend for whom the Expo was their first steampunk convention and they were still trying to wrap their heads around just what they had gotten themselves in to. 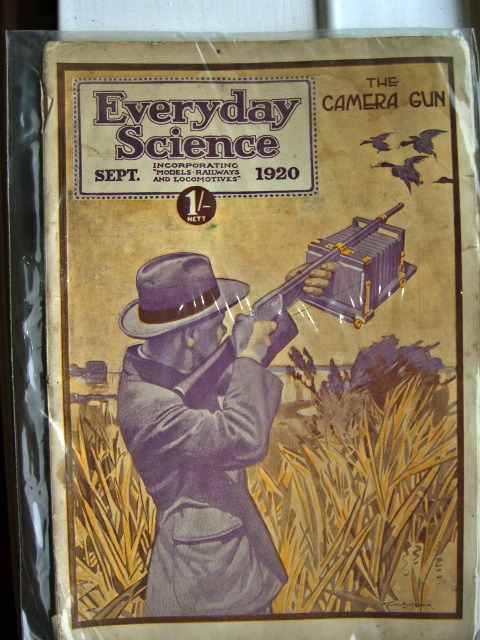 Getting ready for the road trip and being published

My boyfriend's sister is getting married in June, so we're headed for Red River, NM. I'm excited with some trepidation--I don;t handle altitude well, and Red River is a bit higher than what I can handle. Doc gave me a fix...said take half a pill to control anxiety. He thinks altitude sickness isn't a real issue, just a trick of the mind.

I hope he feels it hardcore someday, so he knows.

Anyway, it will be an opportunity for me to sleep. That's all I wanna do,…

Finished my first full out gun mod a few days ago. Just haven't had time to post it yet. This was mad from a buzz bee tek-3. It's a really inexpensive nerf type gun. sometimes you can find sets of two or three for $5 new at the store. I got mine for 75 cents at a thrift shop. It makes me think of a small gun a gambler might keep up his sleeve or tucked into a showgirl's garter. Next project I'm going to try to make a gun from scratch. From odds and ends I've gathered…

It's been a busy couple of days. CONduit snuck up on me, I just found out about it last Thursday and I had to finish my mask fitting on Friday to have it ready to go Saturday morning. It worked wonderfull and was actually quite comfortable. I wore it for nearly 5 hours straight with no problems at all. The steampunk community had a good showing and did an awsome job on the two panels they ran. I got a lot of positive attention for my costume which was really gratifying. It's nice to know…

Steampunk has barely been tapped, but my look at Frahnknshtyne, have been tapped...

Because this is Mowrer's final illustrations until he resumes his look at his Creation...Frahnknshtyne.According to artist Kevin Mowrer...Steam-punk has barely been tapped, It encompasses such a wide range from Victorian proper constructs quaintly puttering along to grungy and industrial contraptions and a whole lot…

It does seem that we are in a stressful age, but I can tell you that every person through out history has said this. From the ancient Romanus historian Pliney to 17th century swordsman & Weapons Master named Silver.…

“Henry Lee” by The Sweet Trade & Vagabondage is the Sepiachord Video of the Day:
http://www.sepiachord.com/index/?p=2598

The Steampunk Daily is out The Steampunk Daily is out!
http://www.sepiachord.com/index/?p=2578 WE NEED YOUR HELP!!!