The Hollywood Reporter broke a story about Boilerplate:

We made brilliant time to Coppersteam. Nothing can beat the Hysteria, especially with a favorable wind.

Roman and Little Darling were exhausted from the journey once again, so they turned in early. I sauntered into the pub to find Echo dancing to the tune of the accordion player. I snuck up behind her and dipped her over my… Continue

Nicodemus and his crew have business in Scandinavia, so we bid them a fond farewell. Little Darling told Forrest to stay out of trouble, he said likewise, then they both had a jolly good laugh. It's always nice to see them, under any circumstances.

I received a wire on the chronograph from the lovely Echo. There's something… Continue

Not that I'll be able to go, but I saw this: http://www.scientificfair.com/ which bills itself as the 49th International Antique Science & Technology Fair and couldn't help but notice the pics of all kinds of antique science gadgets. I imagine from the description of the items to offered that there will be quite a few which will offer a great deal of inspiration to steampunkers. Hopefully, someone reading this will be able to go and provide pics… Continue

It took us two hours to repair the Flying Alchemist, three hours to catch up with the Phantom. We cruised under the radar covered by our steam veil. My guess would be that Salazar would be too preoccupied to notice us. The Phantom was still showing its battle scars from the assault on Coppersteam. It must have been a narrow getaway. No matter. He… Continue

He survived... he always survives.

We reached Iceland on good time. Following the signal from the Flying Alchemist's chronometer, we found them on an glacier on the northeast corner. Nicodemus greeted me with a sigh of relief. Their ship was in bad shape, the balloon had been punctured, and their back propeller had been bent… Continue 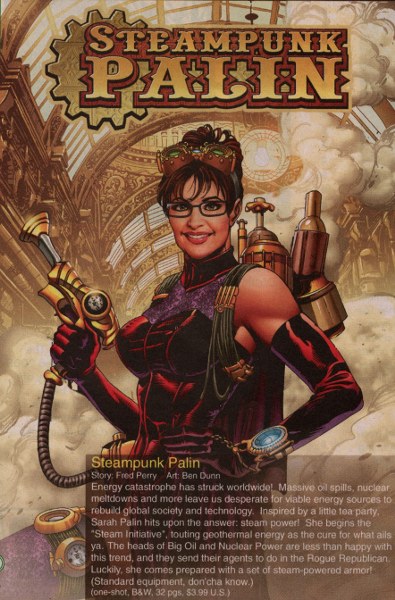 No, really. Kill me so that I don't have to see this comic book.

Well, it's Fred Perry and Ben Dunn so it might not be too wretched.…

I am a photographer and have submitted by way of a designer for the 1000 Steampunk Collection
book.


I have been photographing the Steampunk culture as well as other historical groups Ren Faires,,Civil War ) and fantasy imagery (SyFI conventions) for
awhile.

I would have loved to stay longer and enjoy Lady Nightshade's hospitality, but we received a very alarming wire on the Chronograph... from the Flying Alchemist. It read:

Not good. Little Darling was in tears… Continue

Seeing as we were still in the South Pacific, I felt it would be a crime if we didn't pay a visit to sunny Australia.

Millions of years ago, a meteor fell from the stars and struck the Earth in the Australian outback just west of what is now Alice Springs. The Gosses Bluff crater, known as the Tnorala to the native aborigines… Continue

Took us a day longer than I expected to reach the Triangle, due to opposing winds, but we made it. We found the Flying Scotsman stuck in a time loop 200 miles off of Bermuda. They weren't hard to spot... McSweeney's balloon is made of hundreds of kilts sewn together. Angus' vessel and it's crew… Continue

Seems that Angus has gotten himself remarkably deep in custard thick trouble. I tried sending him a message on the chronograph, but it wouldn't go through. I tried to pinpoint his location by tracking his chronograph, and it read that the Flying Scotsman was 200 miles southwest of Bermuda... between November 16… Continue

Entry #41Date Recorded: December 12, 2998
Always good to be back at Coppersteam.

I popped into the laboratory to pick up the scope and discovered a rather odd message on the lab chronograph. The message read:

I have found blog!

Yes, I am aware that it takes me an unusually long time to acquaint myself with a new site, but when the brain is older than the body those things happen sometimes (it's called rust my dears). I have now discovered the blog, please check your sanity at the door as I cannot assume responsibility for what may or may not happen to it here.

This also temps me to reveal more information on the character of Gunny however, I will not for now. I think… Continue

It occurred to me the other day as we were stargazing over Dover that I had left my telekaleidescope in my lab at Coppersteam. Back to the present to pick it up then. Coppersteam must be settled in it's new location in the Pacific by now, so it may take us about a day to get there, but no matter. All the more time for Roman and Little… Continue

As promised, it is time once again for a book giveaway contest! We have multiple copies to give away this time, thanks to the wonderful people at Doubleday. As a result, we're running this contest in two (two!) places: here at the Steampunk Empire, and also at the Steampunk Librarian. You can enter in one or both places. Details on how to enter the contest follow after…
Continue

Watch this space! But do not speak of Fight Club.

Later today, there will be details on a book giveaway contest! It's a very good book and you'll like it, I promise.

For now, I give you modern-day Sherlock Holmes (no, really) and...Jane Austen's Fight Club.

TEA AND CAKE OR DEATH!!!

So yeah, now That I’ve gotten the basics out of the way I can start regaling people with our crazy expolits of randomness. Todays excusion was into The Trundle Manor- Home of the Secret Society of Odd Aqusitions. If you like the strange, and you’ve not been there… Uh…. Get off your a**. Trundle Manor runs out of the home of Mr. Arm and Wunder Vixen, Velda von Minx. It’s availible to view by appointment only, and houses a fantastic… Continue

Entry #39Date Recorded: February 29, 5624
The fifty-seventh century! The age of peace. A much needed reprieve from recent dark happenings.

We made port in Dover at the Montressor Museum of Science, the future home of the newly reformed British Academy for Scientific Advancement. Home of the 'first' time machine ever built (first to their… Continue