On the precise determination of time 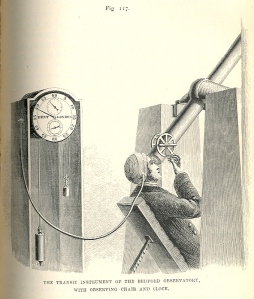 Precision mechanical clocks are regulated by observing stars as they transit the local meridian. The clock pendulum is then adjusted to alter the rate of the timekeeper to synchronize it with the earth's rotation as determined by measurements of these reference stars. From 1893 time signals were sent…

When I saw this article on the Skepchick blog about a community of social spiders that covered most of the interior of a waste water treatment plant, an open building covering almost 4 square acres, I couldn't help but think of it protecting the lair an evil scientist.
http://skepchick.org/blog/2010/10/happy-halloween-giant-spiderweb/…
Continue

In exploring the range of music that has been classified under the steampunk umbrella, Psyche Corporation would be on the more Gothic side of the spectrum. The one-woman musical singer behind the band, Psyche Chimère possesses a versatile voice, and her music ranges as far as the imaginative topics she sings about. At turns Psyche Corporation moves from evocative and theatrical, as with“Part of Her Design” or “Beast”; to…

"Very well then," I said "just what is this all about?" "It is about a box Johannes. A very unusual box." Said Prof. Winslow. "A box?" I inquired. "And a scroll!" added young Greenfield "Do not forget the scroll!" "Quiet Greenfield!" grumbled Prof Boilinger "We will do the talking here."

Prof. Winslow led me to the huge statue of Sobek that stood overlooking the temple chamber. At the base of the statue was a life-sized statue of the god Anubis and in front of this stood a stone altar… Continue

The Anatomy and Mission of an Infinite Biology Airship (IBA)

There are eleven IBA ships, all under the command of Col. Vincent Loveless. They each are capable of rapid self repair, and adaption to fit the current demands on them.…

Musings Macabre:
The Ramblings of a Lunatic Mind


29 October, 1877. Already I feel the Beast within marshaling to resist. It was only this afternoon I committed to consulting the new Doctor. Gathering my own Will, I bundled my only Earthly Treasure, my Lady Wife with her constant companion, (the terminally cute pooch known simply as Wee-Dog) and set forth to begin this journey into the dark seeking the proverbial “Light at the End of the Tunnel”.

This is not my first… Continue

The ability to laugh at oneself epitomised!

The ability to laugh at oneself epitomised!

Explaining the Internet to the 19th Century

Not my work. I just found it... amusing!

A few people have made me feel welcome here and I want to say thanks. I don't want to embarass them by calling them by name, but they know who they are. I've been here two or three weeks and it's been hard fitting in. Harder than I thought it would be anyway. So like I said, I appreciate the handful of members that went out of their way to be welcoming.

Entry #122
Date Recorded: July 9, 1765
I love it when a raid goes well
Seeing as this was Annalee's first raid, and we were all a bit tired and hung over (myself excluded) from the St. Patrick's parade, I felt we should pick an easy target... namely one that couldn't fly. We zipped back to the 18th century to the Bay of Bengal off the coast of India and found ourselves a lone and unsuspecting East India…
Continue

Sgt. Foust
-
Two days’ furlough was our reward for clearing out that pirate’s nest. We took a ferry to French Martinique, and proceeded to reconquer in the name of the United States. As an NCO, I found this visit a bit less carefree than the last time I was here, but no less exciting, to be sure.
-
The first place that I went was a little bar called Le Petit. That’s the one thing that I don’t like about Martinique… all the French names. It’s hard for a man to sit down in a place… Continue

What I have done so far:

Crappy cell phone picture. Since that weekend I have my new bowler hat, and my sack coat is complete. The frock coat pattern is here, and I will start work on it after this weekend. Once the basics are completed I will then begin work on future/past tech. Still not too sure what I will be building but a few thoughts come to mind-

A hand held radio. This would be very useful for a policeman to have.

I'm sure that it all some sort of coincidence but it sure looks pretty interesting. As if she is just chatting away on her cell phone as if if was yesterday.

Congratulations to Giada, winner of our giveaway drawing for The Half-Made World! Many thanks to everyone who participated, and fear not, there will be more giveaways (and probably more snarky videos).

You may remember Tor's Steampunk Month from last year. This year, they've revamped it into the Steampunk Fortnight, with more great articles like…

I have two posts up today:
At Tor.com: Steampunk Abstractions: On Commodification -…
Continue

From what I could observe from my position at the base of the stairwell, the chamber was quite large. The underground room was square and at the far end of it stood a great statue of the crocodile god Sobek who looked serenely down on the visitors to his ancient temple. To me left were crates in which were packed (I am guessing) artifacts found in the chamber. To my right were the members of the museum's expedition.

I recognized the voice of Prof. Bernard Winslow of whom I was well… Continue

No such thing as a good ride home...


Alright, for the people who had read my previous blog about my Halloween event, you are probably wondering how things are going with that, as the event is looming closer-this Friday in fact.

Well I had meetings! And sadly, only one of them did many people come. The other- only 3-4. Disheartening, I’ll admit. It frustrates me sooo much! However, you must go forward-…

Alright, for the people who had read my previous blog about my Halloween event, you are probably wondering how things are going with that, as the event is looming closer-this Friday in fact. Well I h…


Alright, for the people who had read my previous blog about my Halloween event, you are probably wondering how things are going with that, as the event is looming closer-this Friday in fact.

Well I had meetings! And sadly, only one of them did many people come. The other- only 3-4. Disheartening, I’ll admit. It frustrates me sooo much! However, you must go forward- alone if…