Animated Music Video - Everything Stops for Tea, by Professor Elemental

Just a quick heads up-- recently finished a full animated music video for "Everything Stops for Tea," one of my favorite Professor Elemental songs. I've had the good fortune of doing quite a bit of work for him, including the album cover for Father of Invention, and the entire album sleeve design for his upcoming EP release.

Check out the new video here:

Are You a Steampunk, a Victorian Recreationist, or Other?

Here is a short quiz to help determine how much steam is in your punk.

1. My minions / social inferiors / laboratory assistants address me as...

a. body armor
b. something kicky, yet elegant
c. whatever the valet / lady’s maid puts out

a. an MK47
b. a particle beam weapon functioning in the near… Continue

Frugality of a certain kind

I'm cheap.
Not because I want to be.
I don't have tons of cash laying around.
So I'm gonna show up at my events with my home-spun tablecloth and my self-printed poster that is regular 8.5X11 because that is the size of printer I have and my self-designed bookmarks with my self-edited books and self-designed covers and in two cases self-taken photos...

"Prayer Loop Song" by Supaman is the Sepiachord Song of the Day:

"Prayer Loop Song" by Supaman is the Sepiachord Song of the Day:…

A Map of the Solar System in Adele's Universe

I've mentioned this before, but since I've been making some remarks that incorporate the names of planets, I've decided to attempt a more clear description of the Solar System in what I've decided to call "Adele's Universe".  In order to do so, I've made a rather crude map, but a map nonetheless.  Hopefully it will stop any confusion that may occur when I say things like "Areans".  I should also add that nothing in this map is to scale.…

The conclusion to the Airship Ambassador interview with Jean-Christophe Valtat,

ACT II
SCENE I:  Upstairs at the inn.  The largest of three rooms which everyone will be occupying for the night.  It is about 2130.  Adele and Regnad are seated on a small couch.  Sabeetha, Marie, and Krancher are each in chairs facing them.  Caroline is at a small desk, just finishing the second of two Sylothian newspapers. Lady Tekla and Dietlinde are absent.

A.      That was a pretty decent meal.  I sure did appreciate that roast chicken!

"Apples" by Delhi 2 Dublin is the Sepiachord Song of the Day:…

Awhile back, I related some odd coincidences with regard to the character of Adele Calloway.  These can be found here:  http://www.thesteampunkempire.com/profiles/blogs/something-different-strange-coincidences

Back then, I mentioned that I might tell the story of Adele's middle name someday.  Today is that day.

Soon after I'd settled on Adele's… 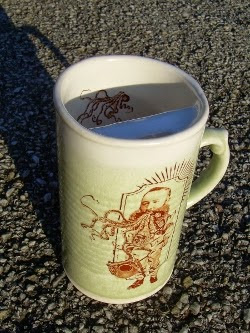 Back in October at the Steel City Beard and Mustache Club competition, I purchased a mustache mug from One Eyed Cat and it quickly became my favorite mug. And, yes, it's because it's essentially an adult sippy-cup, specifically designed to keep my beverage out of my mustache.

Well, at one point some months…