I did not know that Robert Fulton built subs before working on Steamboats. In fact, he only switched to boats before he could not get anyone to buy his subs. Here is a very Steamy looking model that I make just have to get
http://vcshobbies.com/product1141_lastcat172.ihtml

The crew of the Airship Archon were planning to have a photoshoot with the guys from The Enthusiasts at Ohayocon. Initially, it was going to be on Saturday but it got shifted to sometime Sunday. And then it got shifted from the morning to the afternoon.

Beyond Victoriana #12: Sneak Peek at Steampunk Comic "The Seven"

This week's feature came to me from MySpace (yes, I still have one, and keep it updated...sorta). From the steampunk community there, I friended Tess Fowler. She'd done some gorgeous steampunk erotica work in the past, but I noticed that she began posting character designs such as these:

Cue the double-take on the names. Characters of color in my steampunk? And (gasp) one of them is Vietnamese-?

Since then, I've… Continue

Due to snow the Dame De Fer was delayed

Yes Ladies and Gentlemen. Unfortunately due to the weather The Clockwork Dolls were unable to land in the lovely city of Baltimore today. Even though we did threaten the sky tower operator with certain peril if he kept us from landing, he would have been derelict in his duty and we would never want our friends and fans, who we do care about, to travel in such perilous conditions to see us.

Though this may be sad news, I have equally better news. The concert has merely been delayed… Continue

My obsession with photos of light.

I have done a bit of photography, amateur and professional. The ones I enjoy the most are the ones I have antiqued.
Pardon my boring slide show but I thought I would share a few...

Here is a wedding I did at a lovely stone amphitheater. My mother, a portrait with her 22 year old cat. 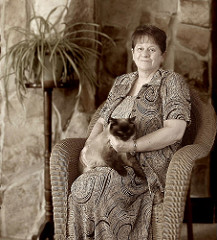 The Logan LDS Temple. I had a… Continue

The Strange Days of Winslow Beggley.

It was hard on most spectators to take in an overly active man approaching middle age. In a way shouldn’t he be comporting himself according to his years and his station? It was even… Continue

If anyone would like to meet up with me it'd be splendid. I'll be at the Nova Albion Convention in March, mainly doing things for my documentary for college, nevertheless I WILL also be enjoying myself when not busy so come up and say hi. I'll be with a group of people, most of which will not be dressed in Steampunk attire, and one will have a camera. I believe I'll be hard to miss.

I am loving the new version of FireFox and was just wondering how many folks have put a steampunky persiona on it and what good ones you have found?

By the time you receive this letter, you will have received my telegraph and decoded its Vigenere transpositional cipher. Again, I must profoundly apologize for worrying you. I cannot help but believe that there was some suspicious clue I overlooked when hearing that you had sent me a package. So overwhelmed with joy was I at receiving any gift from… Continue

A vest which doesn't have much at the back, and you tie it back behind your waist.

And it has a little hood.

It's available for RM25 (which is, what, USD$9?) and it is totally the cutest thing on the face of the planet and I'm so tempted to go back and get one or a dozen.

The main problem is that it's in plaid. But oh man, the design is the Cutest Thing Ever.

Here's a steampunky sort of idea: laptop covers which look like old books. Nifty, aren't they?

I wouldn't go far to say as I have debated with this man as opposed to bring in another perspective and I think he bring excellent points to the argument of steampunk music. I'm not entirely sure of the extent of his knowledge of this social network however those here can certain join in the conversation at his blog regarding the state of steampunk music and bring in your perspective as… Continue

While my eldest daughter was home from college, over the Christmas break, she introduced me to tektek.org's dream avatar maker. It allows you to create one of those cute little GaiaOnline.com style avatars without spending months playing Gaia in order to earn all the accessories you want your character to have.

There are over 400 pages of items to choose from, to dress up the avatars. Many of… Continue

Home from the Field

What a great time I had in Chattacon. I was on the "Maker's Panel" and learned a bunch myself. I love seeing the creative spirit unleashed. I hope to see more and more of cool exploration of the manifested imagination. We have a gaming con that weekend but are still going to try and go!

Beyond Victoriana #11: From One Other to (An)other: Review for Jaclyn Dolamore's Magic Under Glass

The intelligent automaton—one of the many symbolic Others in sci-fi literature. When characterized sympathetically, the automaton represents humanity without being human, the lone outsider puzzling the world around it. The Othered Automaton pops up in steampunk lit too, like Boilerplate and Mattie from The Alchemy… Continue

Till I get some of my stuff done, look at this. It's is an art deck currently being designed by http://www.tormentedartifacts.com/

The suits are bones, the sea, cogs & I think circles? Anyway here is a preview of some of the cards.

I thought this might be of interest. I am getting a few decks myself.

You can get one for yourself by preordering here:… Continue

Steampunk music has, for the purist and elitist steampunkers, been a touchy subject. After all, there hasn't been a strong connection with music and steampunk movement like most other subcultural groups. In fact, steampunk represents one of the few subcultural movements that have developed with music inspiration being virtually non-existent… Continue

A Message From the Dungeon

I have been away for a time now. The real world job has interfered for the first time in 2 months in the last week or so. I do apologize. But do not fret I have been burning the midnight steam in the deep bowls of the dungeon and have come up with some dastardly ideas that will helps cowford to become the city everyone needs to modeled after and also be the "PLACE" to visit. As well as be the leader in steam, airships, metalworks and submarine… Continue

Just a quick note for anyone wanting some truly great and authentic pictures of a by gone era. This site has original photos dating back to the civil war. Large resolution and stories added to the pictures. Hope you enjoy them!